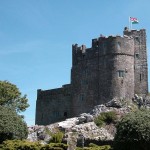 We are blessed in this part of Pembrokeshire with many lovely, historic places of worship. The origins of most of them lie in the days when travel was considered easier by sea than by land. Travellers, merchants and missionaries seem to have constantly been crossing and re-crossing the seas from Ireland, Cornwall and Brittany to this corner of Wales. Saints like Brigid, Ishmael and Madoc made landfall here, founded churches and worked to spread the good news of God’s transforming love shown in Jesus Christ.

Some churches, like Haroldston, are hidden away from the sea for fear of pirates or the weather, others like Dale and Talbenny, stand as beacons and aids to navigation for seafarers. Some, like Marloes, with its dedication to Peter the Fisherman, speak of a long connection with those whose work has led them 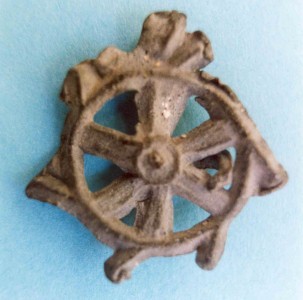 out into perilous waters. All speak eloquently of an enduring faith in Christ through all the storms of life and point beyond themselves to our true haven in the kingdom of Heaven.

May you be blessed in all the journeys of your life and find, as you share this rich heritage of faith, enlightenment and inspiration.

This part of Pembrokeshire is rich in history, archaeology and legend. Across this landscape King Arthur pursued Twrch Trwyth in the story of Culhwch and Olwen. Here, the cult of St Teilo continued centuries after his death, as his skull was used to draw up healing waters for the sick. To this area St Brynach fled from persecution to establish his ministry and, during the Middle Ages, Preseli was a battleground in the conflict between the Welsh princes and the Normans.

A significant event took place in the small coastal village of Dale in the year 1485. The future king, Henry Tudor, sailing from exile in France, first made landfall here before starting on his momentous journey to Bosworth Field. He is said to have built a chapelon the nearby headland in gratitude of Heaven for a safe landing. Today’s lighthouse on St Ann’s Head is thought to be on the same site.

The parish church, however, is situated in the sheltered valley connecting Dale’s west and east beaches. Its only close neighbour is Dale Castle (now a private residence) which is medieval in origin. The de Vale dynasty, as landowners in the 13th century, probably built the manorial church on the present site. The nave and chancel show signs of medieval, and the tower was added later, probably around the year 1500.

The church was completely rebuilt in the 18th century and renovated again after it had been struck by lightning in 1889. The present day interior remains an harmonious example of the styling of the late Victorian era.

This church contains a Norman Font, a vaulted chancel and transepts and squints from the 13th century. Other features are from the 19th century. 1874 saw a major restoration of the church, which included a new roof, and the internal baptistry with steps, designed for baptism by total immersion. This is is an unusual feature in an Anglican church, and perhaps reflected a wish to counter the attraction of the chapels. The church was reroofed again in 1987. There are examples of traditional and modern stained glass. Services are normally held every Sunday, and visitors are very welcome. The surrounding churchyard serves the whole community. There is mention of an earlier church in the area possibly dedicated to St Mary, but its exact location is unclear.

On leaving the church, in the direction of Skomer, take a walk to Martin’s Haven and see a Celtic Cross situated in the Deer Park wall just below the toilets.

St Brides, the smallest of the four parishes in the peninsula is named after St Brigid (Bridget), the saintly nun who founded many communities in Ireland, and is thought to have travelled to Pembrokeshire with St David. She may have established a convent at St Brides, the remains of which can be seen on either side of the driveway to St Brides Castle.

St Brides Church, which is dedicated to St Bridget, replaces an earlier chapel and cemetery standing closer to the sea, which has now been eroded away. The exact date of the present church is thought to be around 1291.

The nave of the church, chancel, and north transept chapel, have a fine timbered roof, and early English architectural features include a lancet window and fragments of a rood screen.

The church benefitted greatly from the Kensington family patronage, the beautiful windows given in memory of various members of that family.

Extensive restoration took place in 2003 and the church was rededicated on St Bridget’s Day 2004.

Dramatically situated on the cliffs above St Bride’s Bay near Little Haven with stunning views across to St Davids, St Mary’s has long been used as a navigational aid for ships and even light aircraft. The present building is mostly medieval with a thick walled double bellcote now containing a single early 14th century bell. The font also comes from this era in the church’s history. The nave was restored in 1869 and the chancel in 1893. The latest addition was a porch added in 1999 that blends remarkably well with the ancient building. The interior is light and airy and the church is blessed with five extraordinary stained glass windows and a statuette by the well-known sculptor and artist Frank Roper. It also contains a memorial to airmen, mainly Czechoslovakian and Polish, who died in the Second World War flying missions from an RAF airbase at Talbenny.

Set in a circular churchyard with its own well, there are suggestions that this is a very ancient Christian site. The first dateable object is the Walton Stone, a sea-rounded rock carved with a Celtic cross of the tenth century. The oldest part of the building is the fourteenth century tower with its barrel-shaped stone ceiling. The unusual roofline testifies to the gradual extension of the church. In the tower is also a small effigy of a woman, possibly Elizabethan, that was at one time claimed to be a statue of St David. In the North wall there are two medieval incised stones, one a picture of a bell, the other a woman’s face. The church was reordered in the 1990s with the chairs, hangings, and altar frontal being made by the parishioners.

St Madoc’s is hidden away from the sea. It was founded c.583 by St Madoc, a disciple of St David, who is also credited with founding the Cathedral of Ferns in Ireland. It has always been a small church serving a scattered rural population but gained some notoriety in the nineteenth century for its high church practices. Visible remains of this are the large oak altar, reredos, and tabernacle. The church was largely rebuilt on its medieval foundations in 1883, the South wall and medieval font being the only parts of the earlier church to survive. There is some interesting twentieth century stained glass, one window showing a very blond Christ in a carpenter’s workshop, the window of which shows the view of St Bride’s Bay from Haroldston Hill.

Built in 1219, this church, dedicated to St Madoc, is situated in the heart of the village and has probably been a site of Christian worship since before the Cymro-Norman settlement. Madoc was a 6th century saint. He is also known under the name of Aidan. He became Bishop of Ferns in County Wexford, Ireland but was educated in Wales and has strong associations with Pembrokeshire. A number of churches and Holy Wells bear his name. It is thought that St Madoc’s Haven, between Druidston and Nolton was his landing place. In 1219 the avowson of Nolton was given to the Benedictines of Pill Priory, Milford but like many Pembrokeshire it was almost entirely rebuilt in 1876. There are however traces of the medieval church in the 13th century triple-faced corbel — representing perhaps a Jesse stone or an emblem of the Trinity and a mutilated effigy, believed to be of a crusader, in the porch. A vault beneath the chancel was used as a burial place for former rectors and other local dignitaries.

A famous rector, Moses Grant, built a school room in 1804 in the churchyard. It was endowed by his brother, John, with £500 for the free education of 20 poor children. The school closed in 1951.

The church is dedicated to St Mary, like several in Pembrokeshire sited near Norman castles. It is reputed to have been built by Adam de Rupe in the twelfth century. Its situation to the north of a roughly circular churchyard suggests a possible earlier foundation. The fifteenth century South Porch has a weathered canopied cross head with three indistinct figures.

The building has ben restored at various times. In the eighteenth century the vicar, Moses Grant, had the chancel arch opened up and then for £1-7s-0d, 3000 slates were bought; meanwhile thatch was used ‘to protect the congregation when the roof was open.’

Worth noting are a coade effigy memorial to the The Rev. and Mrs John Grant; fine stained glass windows including the ‘Scout Window’, incorporating two tracking signs for ‘I’ve passed this way’ and ‘Gone home’, in memory of Viscount St Davids’ sons who died in the First World War, and Celtic Studios window depicting Saints David and Madoc.

St Ishmael’s church is set beside a stream in a beautiful wooded valley which ends at Monk Haven, where medieval pilgrims were said to have landed on their way to St Davids. It is thought that St Ishmael was a Bishop of that cathedral.

The present church was built around AD 1100 as a small nave and chancel, with many additions since that time. Many Pembrokeshire churches occupy similar positions and it is thought that they were hidden as a protection againstViking raiders and others. Graves of monks believed to have been from a monastery have been found near the church.

A short walk leads to the beach at Monk Haven, and from there it is possible to walk along the cliff path and across the Pickle Ridge to Dale and to watch birds on the Gann estuary.

The chapel at Broad Haven is tucked under the hill in a cul-de-sac at the northern end of the village; away from the sea front. It is a plain and unpretentious building, of stone construction, and was built in 1841.

A stream runs through the chapel yard at the northern edge of which are some grooves in the walls. Into these grooves were placed boards to dam up the stream as a baptistry. This was last used in 1941. A baptistry was constructed inside the chapel in 1946 underneath the vestry door which was first used in 1947.

Hephzibah — the name comes from Isaiah 62:4 “and they shall be called Hephzibah, and your land Beulah for the LORD delighteth in thee”. It shares the feature of all non-conformist chapels of having the pulpit in the middle with the Bible — The Word of God — at the centre.

The coast between St Ishmael’s and Little Haven is rich in evidence of prehistoric and medieval settlement of the peninsula. The earliest known occupation was at Nab Head [SM 790112] where some 9,500-7,500 years ago, when sea levels were much lower than at present, Mesolithic people camped on this rocky outcrop, overlooking a broad coastal plain full of game for them to hunt.

Iron Age promontory forts guard the cliffs at Dale, Great Castle Head, Watery Bay, Little Haven, Haroldston, and the 20 hectare of the Deer Park, Marloes, from whose summit may be viewed the prehistoric field systems of Skomer across Jack Sound . Excavation of the early medieval settlement on Gateholm [SM 770072] revealed at least 100 dwelling areas or compartments, constructed of turf or dry stone walling. Third and Fourth century Roman pottery and coins were recovered beside early and late medieval material, indicating that, whether the site held secular or ecclesiastical status, it was occupied at different times over a period of 1,000 years or so.