The Riverside Route of River Cleddau has been used for centuries as the main trading route to Haverfordwest. The bluestones which form Stonehenge were transported from the Preseli Mountains along the Cleddau to their destination on Salisbury Plan. Villages were built because of the waterway. Freystrop has Norse origins ‘Freyr’ could have been the name of a Norse God and the ‘strop’ means village. At Llanstadwell there is evidence of two ancient British encampments. Churches were established along the river. Many of the places being with ‘Llan’ which is the Welsh word for church, as in Llanstadwell and Llangwm. 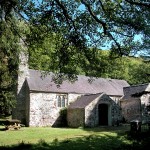 Until the last century, the only way from the village of Hook to the town was by water. Coal was transported from Hook Quay: the last coal mine closed in 1948. Llangwym fisherwomen travelled far and wide to sell their catches. Lime kilns are found in many places along the banks. Lime was used for agricultural purposes. There are ferry crossing places at Llangwm, Rhoose and Burton. John Wesley travelled across the Cleddau from Burton after preaching at Houghton. On August 22nd 1772, while waiting for the waterman, he sat on a ‘convenient stone’ which is still there near the wall of the Jolly Sailor public house. Many religions have flourished along the banks of the Cleddau. There are links with the Mormons as Brigham Young is reputed to have stayed at Little Milford.