Pilgrims from the Sea

The churches along the Pilgrims from the Sea route have their origins in the Christian traditions of North Pembrokeshire. As early as the 5th century, missionary saints and holy men arrived on these shores to establish their communities as ‘clas’ churches. Traces of these may still be seen in the elliptical stone enclosures or Llanau that later became the churchyards. The tradition of setting up memorial stones and waymarkers began in the Bronze Age or earlier and continued at this time in commemoration of local Christians. They were carved with simple, square or ring crosses and often carried Latin or Ogham inscriptions of the individual’s name, status and antecedents. Later these monuments came to be decorated with elaborate knot and scroll ornament. In the 19th and 20th centuries many were rescued from use as gateposts in the fields for safe keeping in the church or churchyard. 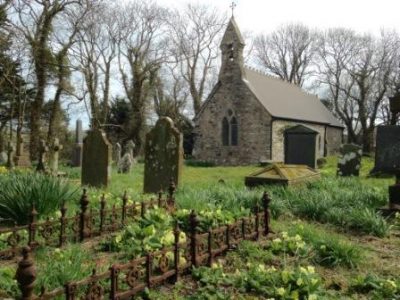 The first churches were probably wood and turf structures: a small cell from which the founder or his disciple practised his ministry, to be replaced by stone as the faith flourished. Further rebuilding took place when the Normans tried to absorb or extinguish the old traditions in their subjugation of west Wales. Most have since been altered and restored at different times because of their continued importance to their community.

The modern pilgrim is advised to follow the trail using an Ordnance Survey map of either scale 1:25,000 or 1:50,000. Outdoor leisure 35 or Landranger 157 may be recommended.